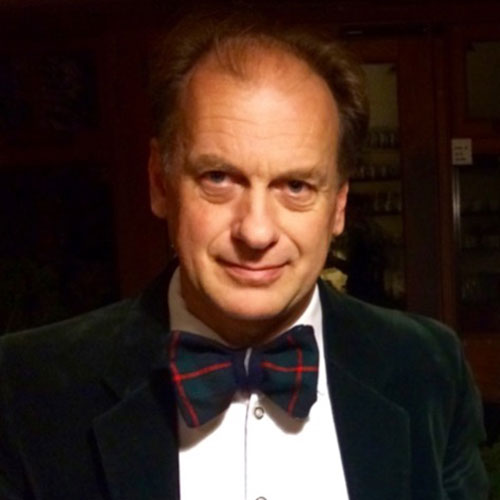 Peter Cowdrey won music scholarships to Winchester College and Trinity College Cambridge. He studied composition with Oliver Knussen. His opera Zeller was performed by the Cambridge University Opera Society in 1985.

He was resident in Polynesia for three years. He then founded the world music group Orbestra, which toured in Europe from Shetland to Bulgaria and in South America, and recorded with Hannibal/Rykodisc. In 1995 he conducted the premiere of his A Garden amidst Flames in Aya Irene, one of Istanbul’s great basilicas, the culmination of a year long project for the Istanbul Festival bringing together musical traditions that had diverged after the crusades. Peter’s works have been premiered at Schleswig Holstein Festival, the Royal Albert Hall, Queen Elizabeth Hall and Purcell Room. Bremania was commissioned by the BBC Concert Orchestra and premiered in Bucharest; it received its UK premiere in Bristol on March 23rd 2019. Peter has written music for the Royal Shakespeare Company. A short video about a performance of Sorrowful Glen, for ten brass instruments, can be watched here. Recovered Voices, a song cycle based on transcriptions of the recorded voices of Gumilev, Mandelstam, Akhmatova and Pasternak, was premiered at the 2016 Moffat Russian Conference. His most recent work, A Larkin Songbook, celebrates the 100th anniversary of Philip Larkin’s birth in 2022.

As pianist Peter has performed Mussorgsky’s Pictures at an Exhibition live while Russian artist Eugenie Vronskaya reimagined the pictures live.

Peter founded Opera Unlimited and conducted the premiere of his one act opera The Lovely Ladies at Christies in 2010. This production was repeated at the Buxton Opera Festival in 2011. In November 2011 The Mad Duchess was premiered at Boughton House in Northamptonshire with further productions in Norfolk and in London. A short children’s opera, The Death of Hook was premiered at The Well Theatre, Moffat on March 31st 2019. You can watch it here. All of these works are written in partnership with librettist Hamish Robinson.

Many of Peter’s compositions are inspired by birdsong; in 2009 he founded the ensemble The Conference of Birds. He founded a charitable initiative, Planet Birdsong, which promotes education and global communication through birdsong. Click here to view a short film about him on the BBC News website. ​