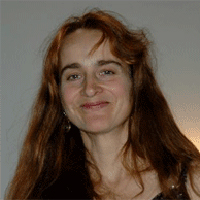 Liz’s playing reflects her passion for travelling and exploring different techniques and styles. With gold medals in violin and bassoon and a music degree from Manchester, Liz ventured via Italy into Europe. Since then she has combined her interest in world music and cultures with a childhood love of chamber music. She performed internationally with world music ensemble Orbestra, collaborating in the UK with the Brodsky and Emperor string quartets on the South Bank, and later with Jubovski and the Bristol Ensemble.

As a member of The Conference of Birds, supported by The British Council, Liz travelled to Brazil to research and promote links between Amazonian birds and music/dance. She has been involved in further birdsong-inspired projects and concerts in Italy, Spain and the UK.

An interest in ethnic styles and instruments has involved Liz in film, TV and radio, playing the young violin-playing poet in “John Clare’s Journey” and violin/gusle in “Welcome to Sarajevo”. Liz features on the CD “Transdanubian Swineherds’ Music” with Orbestra for Rykodisc; on the recording “Birdsong & Music” by “The Conference of Birds”; improvising on violin and viola with Latin singers and quartet Alma de Tango; and as the staged violinist in Peter’s various operas.

Great inspirations have been folk and gypsy musicians in Eastern Europe. Liz has visited Hungary and Transylvania several times, soaking up rich and intoxicating musical influences. She transcribes gypsy and folk music, and birdsong (with Planet Birdsong), to facilitate accessing essence through style and gesture – as a learning tool both in preparation for performance and in educational work. Liz is dedicated to spreading the gypsy spirit through violin playing.