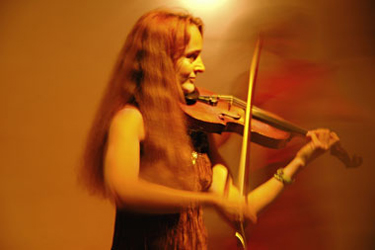 Sandor Fodor was a veteran gypsy fiddler in his eighties when I met him in Jaszbereny, Hungary. I returned a few years later for more classes in Kalotaszegkiraly, Romania.

I had already been captivated by Hungarian style and flair in the early 90s, with visits to London by the group Musikas. I remember being invited onstage to join them during a Hungarian Dance House evening in Notting Hill. Backstage I received a tip from their ‘primas’ (lead violinist), Mihaly Sipos, about the expressive advantages of learning to vibrate the string vertically, as opposed to horizontally, through finger touch. I was also deeply moved by a Janosi Ensemble lecture recital on Radio 3. With these ‘Hungarian String Band’ experiences I became initiated into the hypnotic and energizing power of the gypsy style, where rhythm harmony and melody converge in total service of one another. I realised how you can reach the point where an eloquent melody in it’s self, is able to contain and express bewildering nuances of rhythm and harmony.

Neti (gypsy nickname) came from Kalotaszeg, near Kolozsvar (Cluj-Napoca), a village with colourful traditions in the Hungarian-speaking area of Transylvania. His style of playing was polished, sweet, sophisticated and beautiful; at the same time his rhetoric drenched in unsurpassed, native-raw-rhythmic vibrancy, every inch of the way riddled with intonation and inflection, pathos and humour. Neti emanated true expression of his self, culture and life.

Laszlo Kelemen wrote that ‘his exciting performing style, as well as love and energy for playing his music, is impeccable. He may be considered to be similar to a fine, aged wine: that time brought out the finest “flavours” and “aroma” of his time’.

Actually it is difficult to refer to him in the past tense. True to his gypsy heritage, Neti speaks through his violin. He neither reads nor writes. You learn from him through imitation, a process that necessitates a natural sharpening of focus and simulation of his aural and visual expressiveness. My task soon became clear: to absorb whatever fractional amount of his playing and style I could, backed up by my walkman and with the knowledge that I would ground and refine my learning through transcription on my return to England.